Iron deficiency anemia is the most common cause of anemia in obstetrics.1 Efficacy of oral iron therapy is limited in many patients because of dose-dependent side effects, lack of compliance, and insufficient duodenal iron absorption. Rapid correction of anemia depends completely on blood transfusion, the hazards of which are well known. Newer parenteral preparations are being considered a safer therapy than blood transfusion. Administration of 100 to 200 mg intravenous iron sucrose doses three times a week is an approved regimen by the Food and Drug Association (FDA). Although other high-dose scheme regimens have been published frequently for chronic kidney disease (CKD) patients, very few such dosing regimens are investigated in the obstetric population.2-4

High-dose iron sucrose therapy is now a known practice among nephrologists worldwide to manage anemia in dialysis patients even on consecutive day administration regimens.5-7 However, studies are lacking in obstetrics. This encouraged us to explore this high-dose (500 mg) regimen in an effort not only to treat anemia effectively but also safely and rapidly comparable to that of blood transfusions, and to reduce the loss to follow-up seen with the low-dose (200 mg) regimen. Hence, we prospectively studied a high-dose (500 mg) intravenous iron sucrose regimen utilizing an accelerated dosing frequency in antenatal and postnatal patients with iron deficiency anemia and compared it with a regimen of low-dose (200 mg) iron therapy in a small cohort of patients. Additionally, we compared the efficacy, safety, and benefits of the high-dose regimen.8

In this prospective study, the participants were recruited from patients seen by the Department of Obstetrics and Gynecology at Jawaharlal Nehru Medical College and Hospital in Aligarh, India, following approval from the ethics committee. This study was conducted over a 2-year period from December 2010 to December 2012. All anemic antenatal women at less than 36 weeks gestation and postnatal women were eligible if the Hb below 10 gm/dL, or serum ferritin was below 30 μg/L or transferrin saturation was less than 40%. This cohort consisted of both hospitalized patients and outpatients who may or may not have been already receiving oral iron therapy prior to the study. Any intolerance to either oral iron, reaction to blood transfusion, or intramuscular iron was not considered a contraindication for participation in this study. Patients were excluded from the study if they were hemodynamically unstable, actively bleeding, having fever, or were nauseated or vomiting. Anemia other than iron deficiency anemia was diagnosed and appropriately treated. Patients did not receive red blood cell transfusion for 1 week prior to or during the study period.

After explaining to the patients about the intervention properly, consent was taken. A test dose was administered with 1 mL (25 mg) 10% solution intravenously prior to the total dose infusion (TDI) which was calculated by the formula below:9

The dosing regimen employed two doses of intravenous iron sucrose: 500 mg diluted in 250 mL in group I or 200 mg diluted in 100 mL of normal saline solution in group II and infused over 4 hours on alternating days. Total dose calculated from the TDI formula mostly required two doses of 500 mg infusion and five or more doses of 200 mg infusions. Vital signs were monitored throughout the administration. Any adverse events occurring during or after the infusion were recorded. Prior to administration, baseline data included the gravid state, Hb, red blood indices including mean corpuscular volume, mean corpuscular Hb, and mean corpuscular Hb concentration, and serum ferritin and iron. Further data were determined after 2 weeks of the final dose. Rate of blood transfusion avoided was also noted along with the number of days of hospital stay in both regimens.

Samples for Hb and red blood indices were collected in AkUret K2EDTA vials. Samples for iron indices were collected in AkUret red vials, which are silicon-coated to avoid red blood cell adherence to the wall of the tube. Hemoglobin and blood indices were calculated using an automated Hematology Analyzer Premiere Diagnova with the colorimetric and impedance methods respectively. Serum ferritin was estimated by enzyme-linked immunosorbent assay technique using the quantitative test kit.

All patients were administered prophylactic dose of an antihelminthic (albendazole 400 mg) due to Aligarh being in high endemic region for the same.

All values were expressed as means and standard deviations. Values were compared fortnightly.

The categorical variables were compared using the chi-square test. The unpaired t-test was used to compare independent means and the paired t-test was used to compare means before and after treatment. The relative risk with its 95% confidence interval (CI) was calculated to find out the relative importance of the variable. The p-value < 0.001 was considered significant. Statistical Package for the Social Sciences version 20 was employed for analysis.

Initially, 120 cases were enrolled for parenteral iron sucrose supplementation. However, there were 13 cases lost to follow-up in the initial stage, and thus, remaining 107 cases were evaluated among which after simple random sampling group I included 77 patients and group II included 31 patients. Table 1 depicts baseline clinical characteristics, which were comparable for both the groups. In the analysis of variance, repeated measures found a significant effect of time for Hb as well as for ferritin (p < 0.001). The serum Hb increased from a baseline in both groups fortnightly after the last dose; however, the rise observed in group I cohort was higher with a mean difference of 2.7 ± 0.400 gm/dL compared with 2.25 ± 0.639 gm/dL in group II cohort, with this difference between the mean rise among both groups being highly statistically significant (p < 0.001). The ferritin too increased significantly in both cohorts. In contrast to that in Hb, the rise in ferritin was higher in group I compared with group II as depicted in Table 2. However, both groups could replenish stores by achieving a value above 30 μg/L.

Pre- and posttherapy laboratory investigations in both cohorts

In our study, we observed the side effects among both groups in the form of occasional nausea and thrombophlebitis and found that 93.5% of cases who received the 500 mg accelerated dose regimen reported no side effects. Thrombophlebitis was reported in 64.5% of cases receiving the 200 mg frequent dosing regimen compared with only 5.2% of cases receiving the 500 mg iron sucrose (Graph 1). The duration of hospital stay was significantly less in group I: 5.56 ± 0.97 compared with 11.31 ± 1.63 days in group II, which was highly statistically significant (p < 0.001). Graph 2 depicts the same in the CI graph. 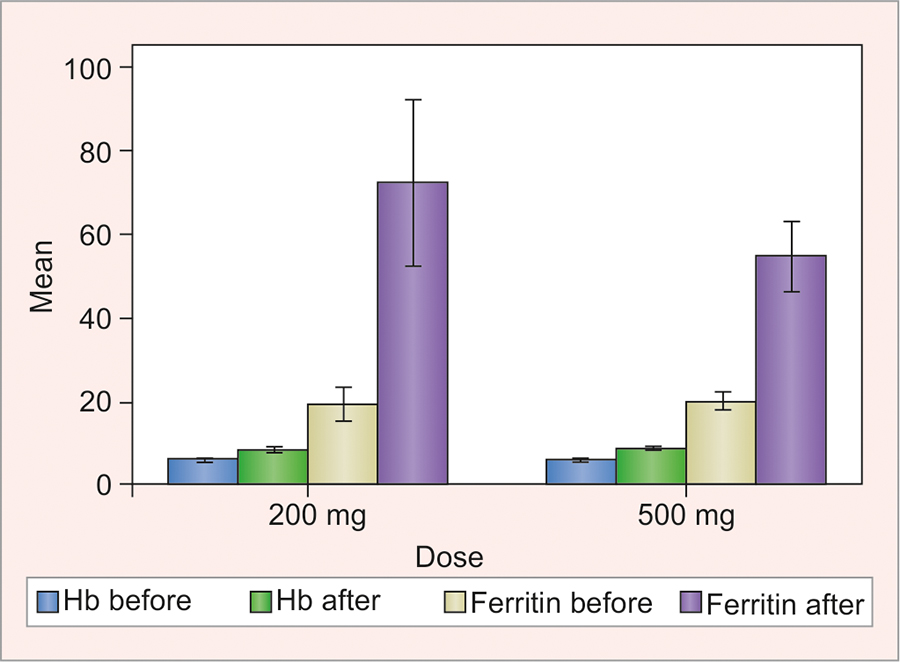 Comparison of hospital stay between groups II and I 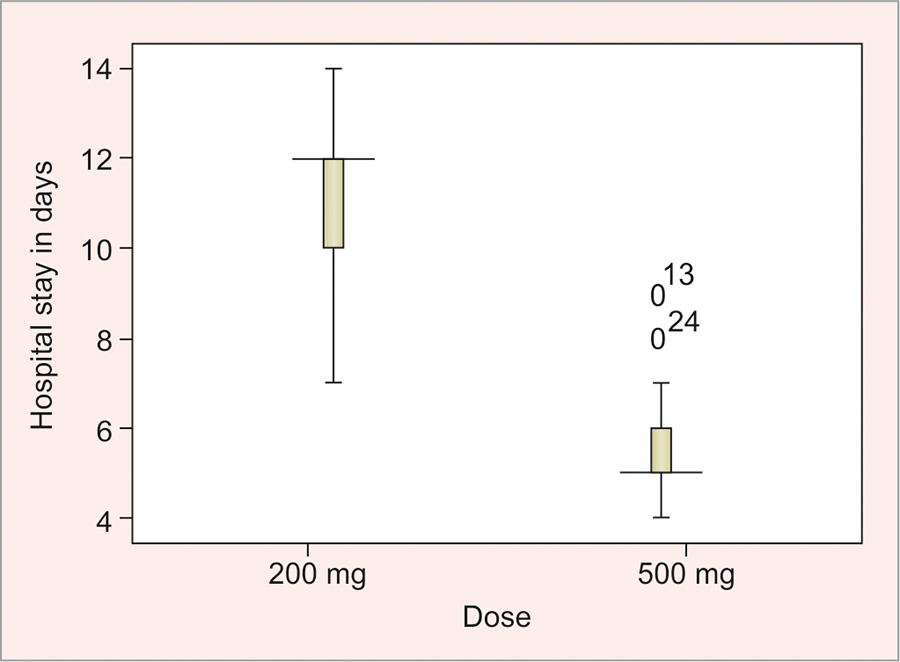 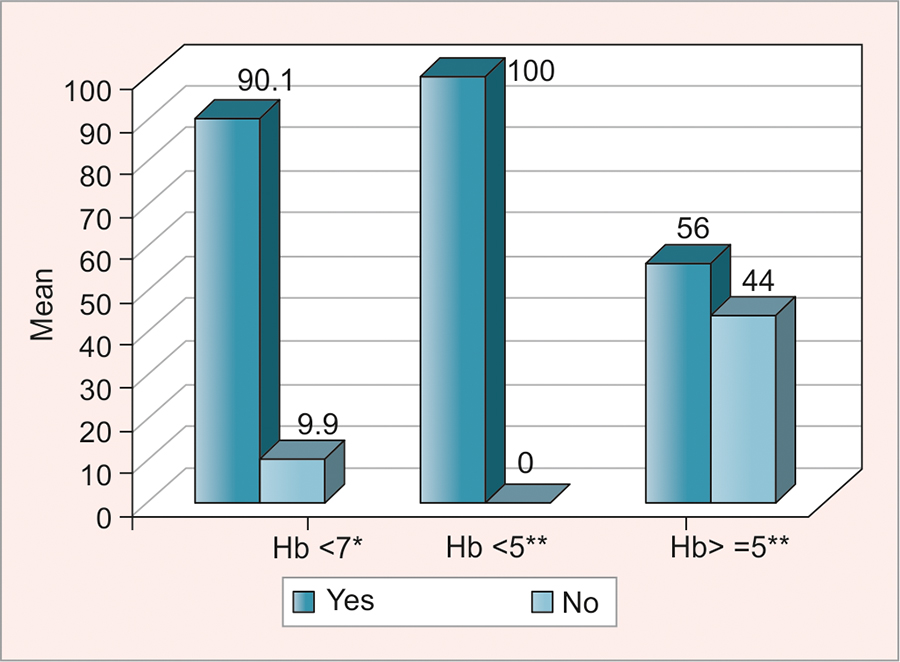 The iron dosage regimes employed were effective in rapidly improving anemia, increasing stores, and avoiding blood transfusion. The 500 mg accelerated dosing regimen was found to be not only an efficient and quicker way of improving iron status of our study population but also economical and safer when compared with the 200 mg frequent dose regimen.

In our study, parenteral iron sucrose administration was started with a 200 mg dose in a single infusion on an alternate-day basis for the calculated TDI. However, the rate of loss to follow-up, side effects, cost, and prolonged hospital stay due to the long duration of total therapy with the 200 mg dose compelled us to administer the TDI in a short span. This observation compelled us to use an alternative approach of administering high-dose (500 mg) iron sucrose in a single infusion on alternate days (maximum three doses a week) for the completion of TDI.

Most cases in our study population were severely anemic with baseline Hb of less than 7 gm/dL according to the World Health Organization categorization. Both regimen patterns improved Hb levels from severe to moderate anemia, hence avoiding blood transfusion. However, the improvement seen in group I was greater. The rate of improvement of anemia was also observed to be faster as the values were estimated from a sample drawn 14 days after the last dose of TDI which was earlier for group I compared with group II.

The serum ferritin levels also increased enough to replenish stores. This rise in ferritin observed was more in group II than in group I. This could have resulted from the samples being drawn later in group II than those in group I, as the therapy lasted for a shorter duration in the latter.

Iron sucrose was well tolerated in the current study albeit in group I than in group II. The frequency of adverse events to the 500 mg doses of iron sucrose has been reported to be highly variable, ranging from 0 to 36%, mostly in the CKD population,7,9,10 making a safety evaluation difficult. In the current study, the rate of thrombophlebitis and concomitant number of IV cannulas changed throughout therapy were both markedly reduced after switching over to the 500 mg dose regimen from the 200 mg dose regimen. However, this was in contrast to a similar study where more phlebitis was seen after 500 mg dose infusions in a small sample as compared with our study.3

The most positive effect with the 500 mg dose regimen was a reduced hospital stay. It drastically reduced it from an average of 11.31 ± 1.63 to 5.56 ± 0.97 days, i.e., to half. This made the therapy popular among the target population. It can help cut down cost primarily and prevent chances of hospital-acquired infections secondarily.

Iron sucrose injection has been available for clinical use for more than 50 years. The dosing regimen specified is 100 mg intravenously 1 to 3 times a week by the FDA. However, this regimen for the calculated TDI in obstetric patient with a limited time period of weeks is associated not only with failure to meet the target but also noncompliance due to the long duration of therapy. This encouraged us to explore this high dosage regimen in obstetrics.

High-dose iron sucrose therapy is now a well-known practice among nephrologists to manage anemia in dialysis cases even on consecutive day administration regimens.5-7 Few attempts have been made to increase the dosage of iron sucrose and minimize the frequency of administration, simplifying the regimen for both the obstetrician and patients.2-4

Less frequent dosing could potentially increase the adherence to the medical regimen; there would be a less frequent need to obtain venous access, thereby decreasing side effects like thrombophlebitis, and a hematologic response might be hastened. Pharmacoeconomical advantages have also been proposed.11

To cut down cost and number of visits, high-dose (500 mg) iron sucrose weekly was compared with a 200 mg dose in a study conducted in Pakistan, although on a smaller population. The rise in Hb was seen with both regimens but more with the 500 mg dose in concurrence with the current study.

In another study on antenatal patients, researchers administered 400 mg iron sucrose divided into two infusions daily in a small study population in order to administer the TDI over 5 days.2 More recently, a similar attempt with 400 mg iron sucrose infusion in 250 mL normal saline given over half an hour or in two divided doses daily in postnatal cases was also proven to be safe and effective.4 Both these studies showed improvement in Hb levels in agreement with our study.

This study focuses on the safety of high-dose (500 mg) iron sucrose infusion on alternate days in obstetric patients. The time period for administration of the TDI in antenatal patients is limited. Administering 100 to 200 mg doses becomes impractical in severe anemia cases with a large calculated TDI due to noncompliance and side effects, and patients ultimately end up receiving blood transfusions.

The current study attempts to overcome this limitation by safely and effectively administering the total dose over a short duration without increasing any burden on patients in terms of time and money. The administration of 500 mg iron sucrose on alternate days for the TDI was intended not only to treat anemia (correct Hb levels), but treat it safely (avoid blood transfusions) and replenish stores.

This study is the largest series examining high-dose (500 mg) iron sucrose therapy in obstetric patients especially antenatal. A large variety of patients were included to make it applicable to the obstetric patient population. Improvement in Hb and ferritin was achieved with decreased adverse effects and hospital visits. The accelerated high-dose regimen may improve the adherence of patients to therapy and also the burden on the health professionals, when compared with 200 mg dose regimen.

Conflict of interest: None